For a long, long, looooooong time, almost everyone who has ever played an Assassin’s Creed game has been saying “Hey, wouldn’t it be cool if we managed to get one of those set in Fuedal Japan?”. Whilst Ubisoft have remained tight-lipped on the subject (and are in fact going for the Viking angle in their next release), Sucker Punch Studios have been listening, and then they decided to do something about it. Ghost of Tsushima is what they came up with, and it’s a bloody great game.

The game takes place in 13th Century Japan, following Jin Sakai, a Samurai who attempts to repel a Mongol invasion of the islands of Tsushima in the opening moments of the game. The fictional islands are to be the stronghold from which an invasion of the Japanese mainland occurs. Following the events of that battle, Jin finds himself trying to figure out how he can continue to repel the Mongols from his home. As a game, this translates into a large, open-world adventure game which takes about 40-50 hours for the campaign, and another 10-20 if you’re looking to 100% the map. 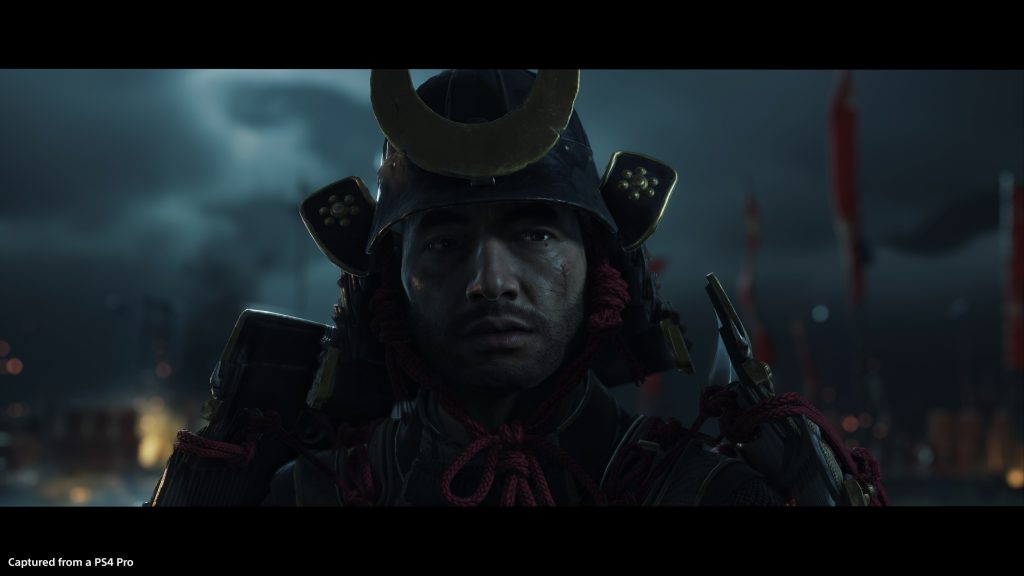 One thing you’ll notice about this game is how pretty it is. It is an utterly gorgeous game, dripping with style, rich audio and visuals, and stunning panoramas throughout. Use of colour in the game adds to the luscious vistas throughout the map and really highlights some of the scenes and moments that play out over the course of this open world title. Whether you’re climbing a mountain, chasing a fox, or taking on a horde of Mongols or Ronin, there’s always a moment where you’ll find yourself hitting pause, or photo mode and just drinking it all in. 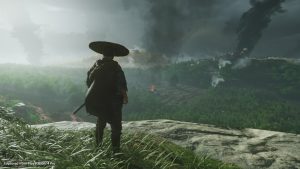 When it comes to combat, action and stealth in the game, there is versatility in the approach. If you’ve not been spotted, you have the option of challenging enemies to face you, which opens up a face-off mode, allowing you to cut down opponents with a single strike. Once you’ve hit the limit on how many you can take out this way, it becomes a dance of swords, combining stances (depending on what weapons your opponents have), thrown and ranged weaponry to overcome your foes. Initially, it can be easy to be overwhelmed in larger encounters this way, but as you develop Jin’s skill trees, you can really start to take the fight to the enemy, whoever they may be. 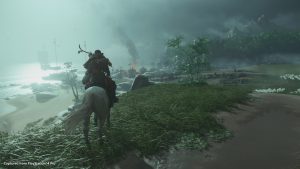 Alternatively, you can use stealth and strike from the shadows, thinning out your opposition and using the environment to your advantage. In some of the enemy controlled areas, utilizing this approach and meeting all of the objectives can yield a satisfying duel with the faction boss for your chosen target.

I do need to mention duels. They’re a lot of fun – one on one fights with specific opponents. They’re a bit more measured than the general combat, and I enjoy them immensely. They always carry a bit more tension, trying to figure out your opponent’s attacks and counter them, usually to a suitably epic background event like a lightning storm or in a windswept field. It’s just really well done.

Your ability to be competent at either one of these things is determined how you spend your upgrade points, which are dished out as Jin explores the islands, helping out the locals and attempting to free them from the opressing Mongol army, and growing his legend.

Wabi-Sabi is a Japanese aesthetics concept, centered around the acceptance of transience and imperfection. What I’m hoping to get across here is that this game is not perfect (no game can ever be perfect). I had my fair share of control and movement wookies, especially when using the grappling hook to move around environments, and the enemy AI doesn’t really ever look up, but none of them were more than a mild frustration. Also, Kurosawa mode, which is essentially a video and audio filter designed to portray the game as a homage to the Japanese director, Akira Kurosawa, wasn’t a hit for me. But none of that was a major concern for me. 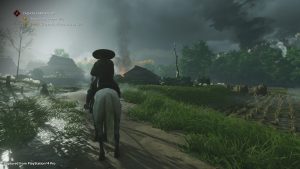 Whilst I opened up by comparing this game to an Assassin’s Creed game, I think that may be a little unfair of me to Sucker Punch. They have lovingly crafted a set of stories in the setting of Feudal Japan. Whilst you can see other open world games, such as AC, or Horizon Zero Dawn in the DNA of this game, it is wholly its own experience, and one that is a real joy to play.

As one of the last big games to come out for the PS4, it’s a beautiful way to see out this generation, and in one of the biggest years of gaming recently as well. If you own a PlayStation, this is a valuable addition to your games library.

I give this a 9.5 / 10, and unless you’re deeply against single-player open world games, or Feudal Japan, I’d say you will enjoy this one immensely.