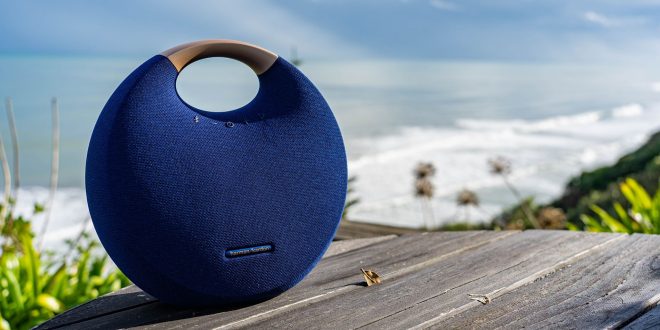 Checking out another bluetooth speaker, This one is a new evolution of something we’ve looked at before from Harman Kardon so its nice to see where they have updated it. First things First, Some specs 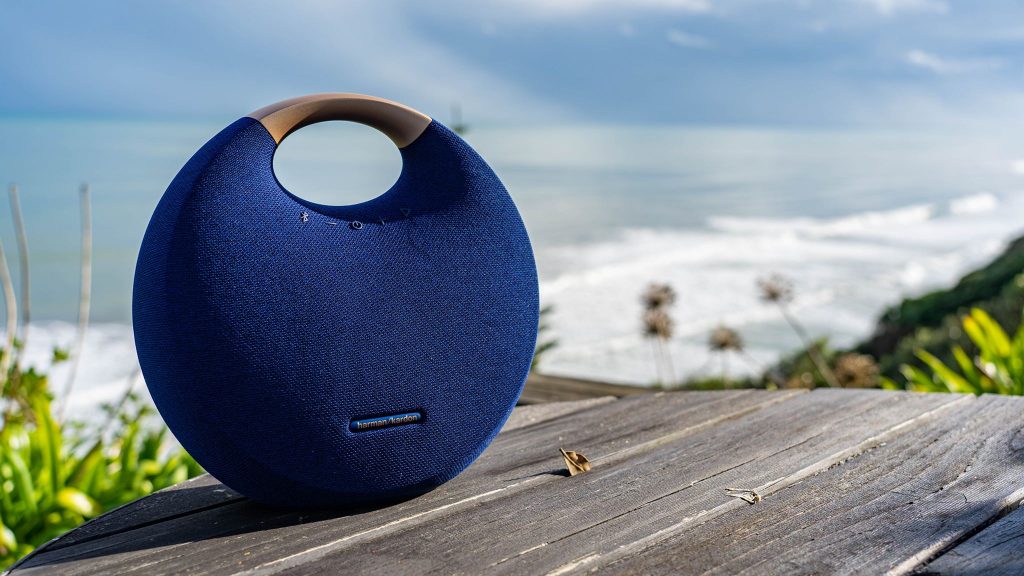 The first thing I always like to do with any review is look at the features they are marketing and then pick those apart first.

Their claims are around design and build quality, good Audio power, Great connectivity and Durability

So lets start there, The design is of course subjective to taste, however objectively I do think this is the sorta thing that will look decent in a normal house or on the back of a beach club on a bit fancy boat. There are options and ours as pictured was a sort of brass and navy blue finish but there are a few options to choose from – Typically aesthetics aren’t what I’m initially looking for if I were in the market for a music play back device but I do welcome the simple and somewhat elegant design over something as over the top as the JBL Party Box we reviewed not long ago.

The power delivery was actually quite impressive, its only a 120mm driver but at about 80% power it filled kitchen / living space with plenty of volume and clear sound at all ranges. Perhaps more impressive it did this with little noticeable degredation in audio quality. So often we see ( or hear in this case) loss of high end clarity due to interfering air movements from an attempt at a big bottom end sound. While we like a good bottom end, clarity is the most important thing and as I say this filled a small open lounge / kitchen / dining room with more than enough sound to dance around and fill the room with music.

Connectivity was incredibly simple even my tech savvy friend had her pre-historic phone connected to spotify and playing back cool tunes in no time at all with zero help from me. And my Note10+ picked it up when doing a basic Bluetooth search and connected instantly. Something of note on bluetooth connections, typically more with headphones is the bluetooth ” line in ” volume. The transmitter power is 0-9dBm now I don’t entirely know what that means but I think I shall pay more attention to that acronym moving forward as it does play a big role in how much signal your device can send to a bluetooth receiving device which has a direct return on how much volume you can get from your speaker or headphones – Thankfully this Onyx did have a 3.5mm jack but as technology moves forward ” Pass the Aux Cord” is being as forgotten as the relationship between a pencil and a cassette tape. In terms of ports you’ve got power / 3.5mm and a USB for firmware updates

Battery power is always an interesting one and we did test this – Basically from the time we got to the Castle in Awakino till we left it was playing something in the waking hours. Its hard to say how much charge it had on it as I didnt have the app just my onboard pre installed software as standard which I don’t recall having a battery percentage. Two hours of charge plus whatever was on there ( from brand new in box) gave 2 days of music play back. 8 hours is claimed and I’m sure we exceeded that playing at an average of 60% volume but often more. Mostly chill music but a fair bit of Post Malone which gives a great amount of bass.

The Onxy is rated for IPX 7 so it should in theory survive a splash from the beach or a knock in the pool if its quickly rescued so I wouldn’t suggest taking it diving but its nice to have that peace of mind that if it gets rained on it will be fine.

At the time of this review the Onyx Studio 6 is for sale on the Harvey Norman website at $359.00NZD which was also the best price we could find for it on Pricespy.

For what you’re getting that’s not a bad investment in terms of sound quality and a decent volume – I think this would more suit something subtle and fitting to a room more than something you are planning for a shed to get a big sound out of. Perfect for playing at a party where the music is less of a focal point but more to fill the ambient space of a room, while complimenting the decor.

Personally I’d be leaning more to volume over something pretty to look at and would lean more to the JBL Party Box 100 for an extra $100 which is nowhere near as nice to look at and would stand out anywhere you place it however the added bottom end and overall volume would be welcome. This Onyx might fit more to a Herne Bay home with high ceilings where it requires being heard and not seen.

It’s hard to fault but its not for me.

Previous B-17 ride along – Cockpit view and more
Next Book Giveaway – Buried Alive: A story of hate and acceptance – By Alex James