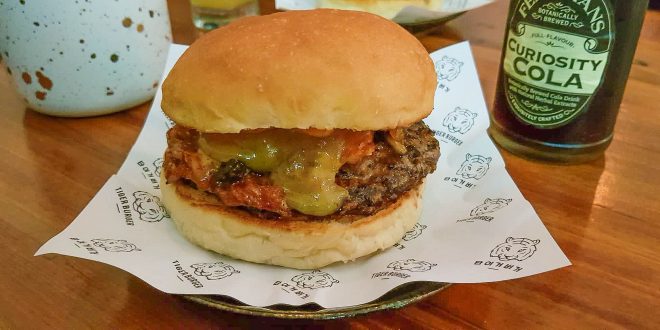 You asked for it so we tried it, we went to Tiger Burger! – Disclaimer, this is a review, thus they didnt know we were going to be reviewing so there was no special treatment or deals. We paid for the food and there was no kick backs etc.

Why? – We saw it promoted on Instagram and it came up in comments when we were asking for places we should check out.

Where? Main strip of Grey Lynn, plenty of parking near by with a short walk less than a block or so.

We got there a bit before the dinner rush, this was on purpose cause we heard it can get busy. Initially while chilling outside waiting for my date, I had the server come up twice and ask if I wanted a drink or anything which was cool. What wasn’t cool was for whatever reason there was a kid, I’d guess under 10 riding in and out the only entrance door onto the street on a scooter at full noise into foot traffic, given it was still peak time for people walking home I thought this was something that might have been best done elsewhere.

Once my date arrived ( late as per usual, no I’m not mad about it .. I’m used to it) we headed inside to check out the offerings,

Inside the place is pretty cool, theres a cool section out the back that has a great vibe and its right by the kitchen, the front part of the joint feels more like a Japanese restaurant so that duality was quite cool. Tiger Burger is an Asian Fusion burger place, which sounded cool but the proof is always in the pudding as they say.

Prices Varied from $14 to $20 ish bucks, and didnt include fries or anything that was just the burger. I decided to go for a kimcheese burger which I wasn’t sure if I should order a double or a single as I had no idea what the size was like. When I asked about the size the server basically said that they are about the same size as a burgerfuel burger, they were not. I don’t know if you’ve ever had a double american muscle from BurgerFuel but that’s not a small burger. I assumed from what I was told that this thing I was gona order was going to be that sorta size. I was mislead.

So I ended up having..

One of the first things I noticed, as I said.. this was small.. Smaller than a standard Burgerfuel Burger.. less diameter than a quarter-pounder I would think, maybe I need to start taking a measuring tape and scales? I’d almost go so far as to say, dimensions wise I’d be about on par with a BigMac.

But that’s about where the similarities end

The Beef was possibly one of the best I’ve ever had, hands down that shit was cooked perfectly and the beef was of a very high quality, It said Taupo beef so the assumption being its locally sourced, I never did get to the bottom of that. The cheese was acceptable, certainly good for a burger, I like cheaper, simpler cheese on burgers and I know that upsets a lot of you when we make burgers on Mean Eats. This Aged cheddar had the flavour and melt just right. The bun was light and had its own flavour.

IF they had stopped here it would be one of my top 5 tasting cheese burgers ever. But the Kimcheese has its Korean flair of Kimchi in it, which personally for me let it down, I don’t mind kimchi but given how good the rest of it was, they should have left it like that. I’m sure I could order a double cheese burger and be really happy with it but its their idea and that’s why we go different places.

The thing I assume you’re paying for is a combination of ” its cool right now” and all the ethical sourcing and in house made components. These are great things to be doing but when it starts to cost more is where people tend to shy away. Would I pay $20 for the double cheese burger? probably not, I bet it’s tasty as fuck but for $20 that’s easily a meal of again, the American Muscle from Burgerfuel which is twice the size and still quality products. The other thing that I wasn’t huge on was, because they have their mind set on eihical sourcing etc they also have weird cola’s instead of a normal ass coke. Sure if you want to offer those things its fine I’m sure people out there like it, but keep something consistent maybe??

Also ordered a side of shoestring fries which were $4.50 and some Bacon fries @ $16.50 which were pretty good

I think really tho, for me I enjoyed the experience of trying something new, someone else’s idea But I doubt I’d be going back. At the end of the day when people part with their money at the higher end of the market they are going to want what they want, not what someone else thinks is cool right now. Nothing against the idea, all respect to the chef that came up with it, but for me now knowing what I know, I’d spend my money elsewhere 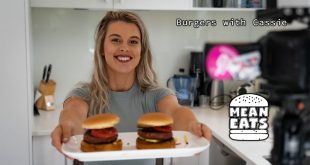 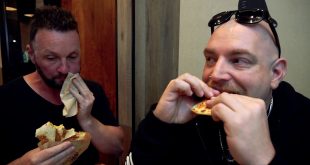 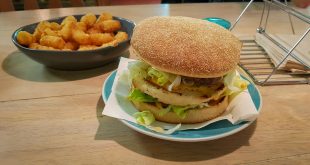 Hey Team, its that time again! So as per the format we talked about on …